As a student of wilderness survival, I have spent my life practicing, teaching and preserving the primitive survival skills of our ancestors. In our culture, primitive skills such as starting fire, hunting, navigation, making cordage, and using stone tools have been replaced with wind-proof lighters, flashlights, microwaves, grocery stores, GPSs, hardware stores and knives. We take modern conveniences for granted and the thought rarely (if ever) crosses most people’s minds about what they would do if ever faced with a true survival situation. Some people never consider the “what ifs” of life, when in fact 1000s of people each year find themselves in daunting life threatening survival situations with very little resources at hand – dependant on their knowledge and wits to survive. Survival is 90% mental and 10% physical. The mental part consists of the will to live and the know-how to keep alive. The will to live is something I can’t teach you… either you have it or you don’t. If you do, however, I can give you some pretty good mental tools for the “know-how” side of things.

As most of you know, I’ve recently finished an 8 month study (culminating in a book titled Survival by Cellphone) about how to use a busted and broken cell-phone to perform basic survival tasks. In the study, I combined the use and concepts of primitive survival skills with one of the world’s most common devices – a cell phone – to learn how basic survival needs can be met while waiting for help to arrive or while attempting self-rescue in a life-threatening survival situation.

Using a Broken Cell Phone as a Survival Fishing Tool

A staggering percent of the world’s population depends on fishing the oceans, in-land bodies of water and rivers for their sole source of food. Without fish and other aquatic life, existence would not be possible for many cultures and peoples.

Fish are incredibly nutritious and contain a variety of fats and oils that are extremely healthy. Many fish can be eaten raw and almost all of them can be fried, skewered, boiled, baked, grilled, smoked, steamed and even dried. With over 80% of the earth’s surface being covered in water, there is probably a pretty good chance you will be near some kind of body of water if you are in a survival situation. Not only can the source provide you with drinking water, but it can also provide you with FISH if you know what you are doing. Believe it or not, your cell phone is also your survival tackle box.

Traditionally, hooks are used to catch fish with either artificial or live bait. In not one of the cell phones that I disassembled could I find or fashion a fishing hook worth mentioning in this post. However, the next best fishing implement is what’s called a ‘gouge’. A gouge is a straight piece of something hard and sharp about 1/2 “ to 1” long. When baited properly it is designed for the fish to swallow. Then, when the line is pulled, or the fish attempts a quick escape, the gouge wedges itself in the fish’s throat – allowing you to pull it into shore. A gouge isn’t as reliable as a traditional fishing hook but will definitely work. And the best part is that your phone is full of all kinds of sharp metal gouges that you can use.

WillowHavenOutdoor Quick Tip: How to Bait a Gouge

For a gouge to be effective, it must be easy for a fish to swallow but baited so that when the line is tugged the gouge pivots on the line and wedges itself in the fish’s throat. The proper way to bait a gouge is to tie the line at a 3/4 point along the gouge. Feed the bait onto the gouge from the short end and use the bait to keep the line parallel to the gouge. As the bait is pulled through the water it should pull straight so that it is easy for a fish to swallow. Once the gouge is swallowed a simple tug causes the gouge to pivot and get stuck – allowing to pull in your catch. See my diagram below. 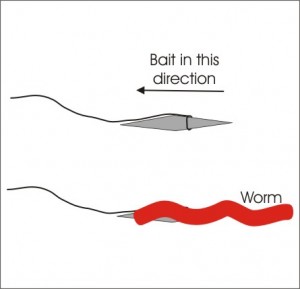 How to Bait a Primitive Fishing Gouge

In addition to the plethora of effective gouges, your cell phone tackle box also has a great selection of flashy little parts and pieces with which you can make very attractive looking artificial lures. Manufacturing artificial lures is a multi-million dollar business in the United States alone. Why? Because fish love them and they work! Fish are very curious creatures – especially when it comes to flashy little lures that appear to be food swimming through or on top of the water.

Artificial lures are great, but fish prefer the real thing if you can scavenge it. The live bait category encompasses all kinds of little critters including worms of all sorts, frogs, craw-dads, grass hoppers, crickets, butterflies, moths, flying insects, beetles, mice and basically anything a fish can swallow that flies, crawls, jumps, wiggles or slithers. Great places to find many of these creepy crawlies are under rocks or old dead trees. You can then bait the metal gouges from your phone with these live critters for a lure that any fish will find irresistible.

Below are some basic metal gouges and a few artificial lures made from cell phone parts. 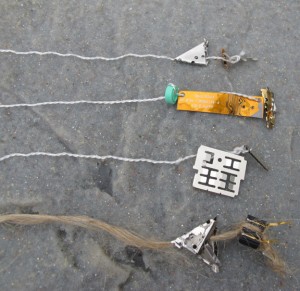 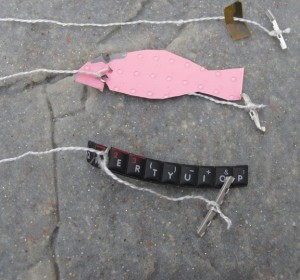 Clearly, to use any of these lures you need some kind of fishing line. While there is no cordage source in your phone you should be able to utilize some kind of string that will work from your clothing, shoe strings or other resources you have available. While a busted cell phone can’t provide enough cordage to use as fishing line, there are 2 viable cordage options which I will cover in a seperate SURVIVAL BY CELLPHONE post titled CELL PHONE ACCESSORIES – CORDAGE.

More often than not, the best scavenger is the best survivor. Many tribal societies scavenge a large portion of their meat from more effective hunters than themselves such as lions and wolves. Scavenging can be one of your most valuable survival SKILLS.

5 Survival Hacks That Could Save Your Life In The Wild